Our History
|
Testimonials
|
Contact Us
|
Our Staff
|
Why Choose Us 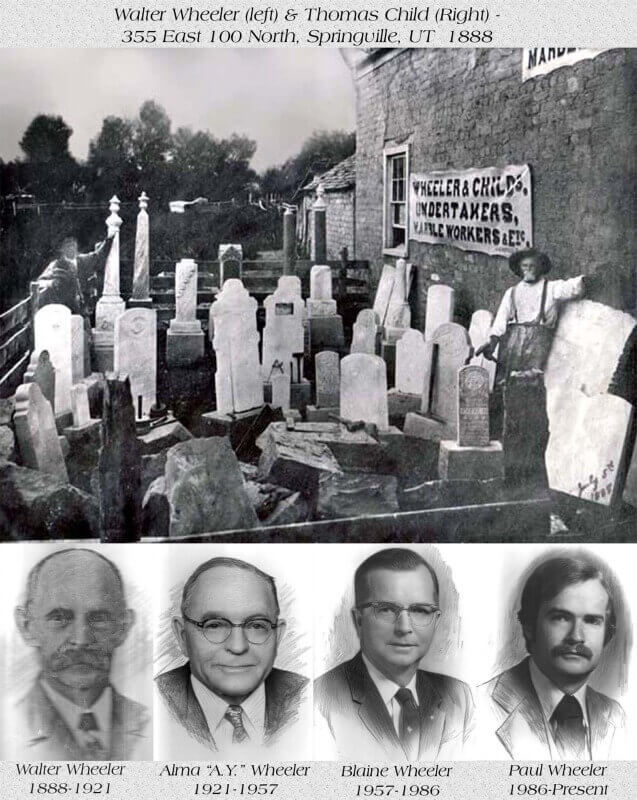 Wheeler Mortuary has been family owned and operated for over 127 years and by four generations. Upon the death of Walter Wheeler in 1921, Walter’s son, Alma Young “A.Y.”, took over the business and rented the mortuary’s first facility. In 1923, Wheeler Mortuary was built at 355 East 100 North in Springville. It wasn’t until 1940, that the mortuary moved to its current location at 211 East 200 South in Springville. In 1948, the east-end viewing room, casket room, and basement garages were added. Walter Wheeler was the mortuary’s founder in 1888. While working in the stone mason industry with his father-in-law, Thomas Child, Walter was injured and therefore unable to continue in that field. As a good friend of William Henry Taylor, the predominate undertaker in Salt Lake City, Walter served an apprenticeship and learned the trade. In 1903, law was passed that required licensing for embalmers. Walter attended Myers College for Embalming, earned his certificate and was the first licensed embalmer in the state.

A.Y. passed away in 1957 and his son, Blaine, took over the family business. Under Blaine, the mortuary underwent a second addition which included the west-end viewing room and public restrooms. Blaine and his wife, Melba worked very hard during this time and dedicated their lives to the service of others.

Blaine’s son Paul, attended Cypress College in 1980. As the fourth generation owner, Paul took over the business in 1986. Blaine passed away in 1992.

Curtis Wilkey attended San Francisco College of Mortuary Science. He is currently employed as the full-time manager at Sundberg-Olpin Mortuary.

To better serve the families in Mapleton, the mortuary added a facility there in 2004. It is the first phase of what will eventually be a full-service mortuary.

In our efforts to more fully serve Utah County, Sundberg-Olpin Mortuary in Orem, Utah was purchased in 2016.

Through all the changes over the years, one thing will not change and that is our dedication and personalized service to every family we have the privilege of working with.